…Americans were led to believe that the virus was unusually contagious, and that it would kill up to one in 20 persons it infected—a 5 percent infection/fatality rate (IFR). Today, we still lack definitive, direct knowledge of COVID-19’s true lethality. The absence of that knowledge allows bureaucrats to continue fearmongering.

By May, a host of studies in the U.S. and around the world showing that the vast majority of COVID cases cause mild symptoms or none, and showing the IFR to be equal to or lower than that for most flus, forced the CDC to conclude that the lethality rate, far from being 5 percent, was 0.26%––double that of a typical flu. Instead of amending their recommendations in the face of this reality, the CDC and the U.S. government tried to hide it by manipulating the definition and number of COVID “cases.”…

COVID-19 is not America’s plague. There was never the slightest evidence that the virus could produce mass casualties; all evidence pointed in the opposite direction. Instead, the ruling class took this opportunity to extort the general public’s compliance with its agendas. Their claim to speak on behalf of “science” is an attempt to avoid being held accountable for the enormous harm that they are doing. They continue doing it because they want to hold on to the power the panic has brought them.

In sum, the lockdowns have been inflicted and perpetuated by people who care more about your subjugation than your health. They want to wreck the U.S. economy and increase the Democratic Party’s chances in the 2020 election. And they might succeed.…

c/o Jessi Melton for US Congress | @votejessi2020
Since she deleted it, let’s share it for her a few hundred thousand times. The Mount Rushmore Speech was President Trump’s Best Ever

President Donald Trump made what might have been the best speech of his political career on July 3rd.… The speech was a tour de force of Americanism; an explanation of why people in this country continue to celebrate July 4th not as a day of infamy (as Joe Biden does), but as a celebration of freedom.…

The speech was a beautiful tribute to America’s past—and future. And yet, the reaction from the usual critics, such as the New York Times, were pitifully predictable. The speech was “dark and divisive,” wrote Annie Karni. Meanwhile, Vice Presidential hopeful Sen. Tammy Duckworth (D-IL) must have watched an entirely different event, because she suggested Trump’s speech was dedicated to the Confederacy and “dead traitors.” To whom was she addressing: George Washington, Thomas Jefferson, Abraham Lincoln, or Theodore Roosevelt? (President Trump did not mention the Confederacy or any Confederate icon, so if you’re going to review a speech, please at least listen to what was said.)

What he did talk about, however, was the “far-left fascism” that threatens to envelop the world—the kind that Duckworth embodies.

What happens if COVID death rates plummet to the point of no longer being a pandemic threat? The media will turn it on Trump.
Tristan Justice, The Federalist – July 8, 2020

If one hadn’t been convinced already, the media infected with a severe case of Trump Derangement Syndrome have now shown they’ll lie about anything. After spending nearly half a decade attempting to legitimize fanatical conspiracies about Russia in a brazen attempt to undermine Trump’s presidency, the media’s alleged truth-tellers have misled the public on virtually every issue since Trump took office.…

The media’s obsession with destroying Trump is also destroying the country. …

Brazen Lying Is Media’s Latest Escalation In Campaign Against Trump

As if orders went out from a central director, nearly every major media outlet flat-out lied about President Trump’s speech.
Mollie Hemingway, The Federalist – July 10, 2020
h/t J.J. Sefton’s Morning Report on A♠

People who actually paid attention to the content of the speech said it was evocative of Lincoln’s First inaugural, a “kindred invitation to unity in the midst of conflict.”

As if orders went out from a central director, nearly every major media outlet flat-out lied about Trump’s speech. Whether they were engaged in reflexive “political advisor” mode like the Stephanopoulos of old, whether they had pre-drafted their reports based on dubious theories about what would be in the speech, or whether they simply decided that the best way to counter an effective political message was to simply lie about it, lie about it they did.

END_OF_DOCUMENT_TOKEN_TO_BE_REPLACED

Even Snopes isn’t buying this one.
h/t SMOD on A♠

U.S. President Donald Trump’s June 20, 2020, election rally in Tulsa, Oklahoma, during the coronavirus pandemic could be connected to two days of 100% positive COVID-19 tests reported in the state more than a week later.

As U.S. President Donald Trump faced political fallout from his June 20, 2020, rally in Tulsa, Oklahoma, many speculated about the health consequences of the large gathering due to the ongoing COVID-19 coronavirus pandemic. One such speculation took place on MSNBC’s “All in With Chris Hayes” program, where on June 29, the anchor addressed a spike in COVID-19 cases in the state.

Though Hayes emphasized there was no way to confirm cause and effect, his analysis led to an incorrect theory that the rally resulted in two days of 100% positive COVID-19 tests a week later. In a later segment, Hayes clarified that the data he presented was incomplete. …

A Reign of Error

What we think about things can be as important as the things themselves, because it forms our moral stance toward the world. But what if our thoughts are in error?

“We will state the truth in full, without apology: We declare that the United States of America is the most just and exceptional nation ever to exist on Earth,” Trump proclaimed from the South Dakota Black Hills. “We are proud of the face that our country was founded on Judeo-Christian principles, and we understand that these values have dramatically advanced the cause of peace and justice throughout the world.”

The media translation of this could come straight out of an article from the satire website Babylon Bee. Trump says America is good, media leaps to Orange Man Bad.

If one hadn’t been convinced already, the media infected with a severe case of Trump Derangement Syndrome have now shown they’ll lie about anything. After spending nearly half a decade attempting to legitimize fanatical conspiracies about Russia in a brazen attempt to undermine Trump’s presidency,the media’s alleged truth-tellers have misled the public on virutally every issue since Trump took office.… 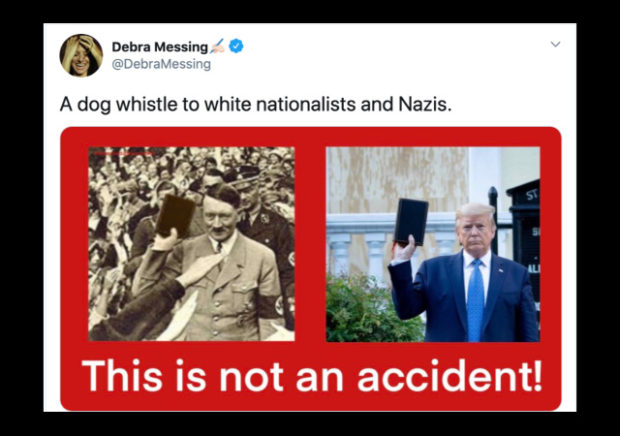 A lot of people are sharing an image that appears to show Trump and Hitler holding a bible in the same way. The Trump pic is from June 1, but the Hitler pic was photoshopped to add the bible. pic.twitter.com/hmaxYfXCxt

Mary Chastain over at Legal Insurrection writes about this, and presents the follow-up tweets of those who subscribe to the Dan Ratheresque “fake but accurate” attitude toward reality.

“Fake or not, trumps similarities to him are still there. He’s a modern day Hitler and he’s only going to get more and more disturbing the closer to election you get”

Trump Derangement Syndrome is a sign of terrible mental illness.