With the help of stolen U.S. technology, China has developed at least three types of high-tech weapons to attack the electric grid and key technologies in a “surprise Pearl Harbor” assault that could send America into a deadly blackout, according to a new analysis.

According to the report from the independent EMP Task Force on National and Homeland Security, China has built a network of satellites, high-speed missiles, and “super-electromagnetic pulse” weapons that could melt down the U.S. electric network, fry critical communications, and stifle aircraft carrier groups.

According to the report, written by the task force’s executive director, Peter Pry, long an expert on EMP warfare, China developed the weapons as part of its “Total Information Warfare” that includes hacking raids on computers.

What’s more, despite China’s promises to attack only after being attacked, Pry revealed new data to show that the communist nation is lying and eager to shoot first with “high-altitude electromagnetic pulse,” or HEMP, weapons launched from satellites, ships, and land.…

India has technically been invaded by #China.
This is the Indian ITBP base at Finger 4, north bank of the Pangong Tso Lake, #Ladakh, #India
China has occupied this base, built bunkers & even planted Chinese flag.
This is undisputed Indian territory.
This is happening right now. pic.twitter.com/6f9BYn74mv

h/t Methos on A♠ and Rodrigo Borgia on A♠

As explained in Gen. Chi’s speech, the Chinese Communist Party’s intention is to militarily defeat, occupy, and colonize the United States.

h/t deplorable unperson on A♠

re-h/t J.J. Sefton’s Morning Report: I don’t know how you say lebensraum in Mandarin but when you read this General’s comments, it’s chilling in its mirroring of the through-line of Mein Kampf.

Chi Haotian was the defense minister of China from 1993-2003. He was also vice chairman of the Chinese Communist Party’s Central Military Commission. He delivered the following speech to a select group of high level party cadres. 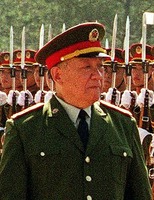 As explained in Gen. Chi’s speech, the Chinese Communist Party’s intention is to militarily defeat, occupy, and colonize the United States. This plan has been confirmed by a Russian defector source who worked in China and had information about a joint Sino-Russian plan to invade North America. This plan was drawn up in 1992, after the fall of the Soviet Union. The division of spoils was described thus: “Russia would get Alaska and parts of Canada. China would get the lower 48 states, with other countries invited in for ‘looting rights.’”

The speech was translated into English and first published by the EPOCH TIMES in 2005.

According to Gen. Chi, China’s overpopulation problem and environmental degradation will eventually result in social collapse and civil war. General Chi estimated that “more than 800 million” Chinese would die in such a collapse. Therefore, the Chinese Communist Party has no policy alternative.

Either the United States is “cleaned up” by biological attacks, or China suffers national catastrophe.

Your Heap o’Links blogger cannot testify to the veracity of this report. Passed along for your own digestion. Or indigestion, depending.

ok on A♠ at March 06, 2020 11:44 AM:
First videos of the supply chain being disrupted at a port. Disturbingly empty. Should watch now and act accordingly.

Oh my GOD. People need to see this. This is catastrophically bad. I pulled this from liveleak to upload here to see. (((Volume up.))) Buy your goods now. #coronavirus #Covid_19 pic.twitter.com/Uh3QLLMue7